Spider Species in the UK

While there are tens of thousands of species of spider across the world, fewer than 700 are found in the UK.

Of the spiders that are found in the UK, the vast majority are not only completely harmless, but also not considered to be pests. Only one spider found in the UK is venomous, and it is not deadly.

The False Widow has a bulbous brown abdomen and females grow to around 1.1cm in size. They are not aggressive and only bite when they feel threatened.

Cellar Spiders are one of the most common species of spider to find inside homes and businesses, often building webs in corners of the ceiling. They have very long, very thin legs and small bodies.

If there isn’t enough food for a cellar spider, they have been seen to visit another spider’s nest, pretend to be a trapped insect, and then eat the other spider. For this reason, many people tolerate a cellar spider or two in the home. But they do like to live closer to one another than other spider species, which makes them more prone to creating unsightly and distressing infestations.

Identified by their shortish legs and large bodies with distinctive white markings, garden spiders are seen across the UK. They’re usually found outside, on webs constructed between shrubs, doorframes, or garden furniture to catch passing insects.

Garden spiders are active during the summer months and generally die off in the first frosts of the year. Females can grow to anything between 0.5cm and 2cm in length, not including their legs, while males are slightly smaller at 0.5-1.2cm, again not including legs.

One of the more distressing spiders to find in your home or business due to their size and appearance, giant house spiders tend to come inside in the Autumn, looking for somewhere warm to find a mate.

Usually brown in colour, with a large abdomen and thick, hairy legs, adult house spiders can grow from 1cm to close to 2cm (not including their legs). Their webs are large, flat sheets and don’t have sticky threads - the spider waits in a funnel in the corner, darting out as soon as an insect gets tangled. 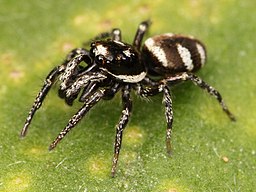 For people who don’t like spiders, a jumping spider has an extra level of unpleasantness, and the giant eyes of the Zebra can be especially off-putting. Both males and females grow to less than a centimetre in length, not including legs, and they’re characterised by distinctive black and white markings.

Their large eyes give zebra jumping spiders excellent vision and they stalk their prey rather than spinning webs. When inside a home or office, they’re usually found near windows - on windowsills or behind curtains and blinds.

Call now for a FREE quote

Request a call back

I am very happy with the service provided by JPS environmental.
I have found working with Gary Horide very easy and he takes time to visit us to discuss more difficult pest control problems. They also have access to the latest pest control techniques and their workmanship is very good with no tenant complaints.

I am extremely satisfied with the works. Thank you

Thanks for this and for arranging your guy to visit site so quickly, much appreciated.

We contacted JPS to assist with a moth problem that was not going away easily.
They were easily contactable and happy to try and fit in with demanding client schedules. Gary was very helpful and gave us lots of information and a range of options to try, returning when we called him at short notice!
Thanks very much, I believe the problem has now been resolved.

To Gary and team,
Thank you very much for carrying out a brilliant job with getting rid of my wasp problem ! I was very impressed with your rapid response to getting this done and the way you carried your work out.
Many thanks.

Just want to thank you JPS for the prompt service and professional attitude you showed when recently you undertook the task of thoroughly cleaning and controlling the infestation of cockroaches at my mother's property.
You made what seemed like an impossible task seem easy.

Just wanted to say a big 'Thank You' for the great job you did for us in removing the wasp nest from our garden which was causing us a lot of stress. Everything is perfect now. No wasps to be seen. Would highly recommend you.

We are a mansion block based in Central London for some time had an ongoing issue with roosting pigeons. We asked JPS for their advice and help. Various options were discussed with the merits for all explained and we eventually opted for bird netting with various gates to give us access on our fire escapes. It has worked a treat and solved our problems 100%. We found their team to be professional and courteous and we would highly recommend them.

Thank you for attending and providing the service. I will certainly forward any referrals.

Thank you for expediting [the installation of new netting and spikes, and deep cleaning to the roof and outside the block] for me.

As BPCA members, you can be assured that JPS Environmental are a fully trained, insured, and trusted Pest Control company. We meet the BPCA strict membership criteria and adhere to their stringent Industry Codes of Best Practice.